to be happy, but is there anything you can actually do to feel happier more often? Or, at the very least, can you limit the likelihood that you’ll feel sad and depressed?

There isn’t a single perfect answer, of course, but research is starting to reveal the incredible connection between our physical actions and our mental health. In fact, it’s very possible that what you do can have a significant impact on how you feel.

As an example, let’s take a look at the link between exercise and depression.

Dealing With Depression: Exercise vs. Medication

James Blumenthal is a neuroscientist at Duke University who specializes in depression. In one of his most famous experiements, published in the

, Blumenthal gathered 156 adults who had mild or moderate cases of depression.

The patients were split into three groups.

Group 1 was treated with sertraline, an antidepressant drug. You probably know sertraline by it’s trade names Zoloft and Lustral. In 2011, over 37 million sertraline prescriptions were written to treat a wide range of issues, including major depressive disorder, obsessive-compulsive disorder, panic and social anxiety.

Group 2 used a combination of exercise and medication. They were prescribed the same dosage of sertraline as Group 1. Additionally, Group 2 exercised three times each week for 45 minutes at a time. They followed the same exercise program that is described for Group 3 below.

Group 3 used an exercise-only treatment. Three times per week, they performed 45 minutes of exercise. This included 10 minutes of warm up, 30 minutes of walking or jogging at a pace that would maintain a heart rate that was 80% to 90% of their maximum, and then 5 minutes of cool down.

Each patient received treatment for 16 weeks (4 months) under the supervision of the researchers and professional staff. At the end of the treatment period, the researchers were surprised to find that all three treatments delivered essentially equal results.

Treating depression with exercise was just as effective as medication, and vice versa. Furthermore, combining the two treatments yielded the same success rate as doing either one individually.

But then the researchers decided to track the long-term progress of each patient, and this is where the study gets really interesting.

Exercise and Depression: The Long-Term Impacts

After 16 weeks of treatment, there were 83 patients (spread evenly across all three groups) that were declared in remission and free from depression.

The researchers decided to let these patients spend the next six months without receiving any treatment from professionals. The patients were welcome to continue their treatment on their own or to try something new entirely.

When the researchers followed up with the patients six months later, here’s what they found:

You can see the results of the study in the graph below. Notice that over 85% of patients in the exercise-only group remained depression free after six months on their own. 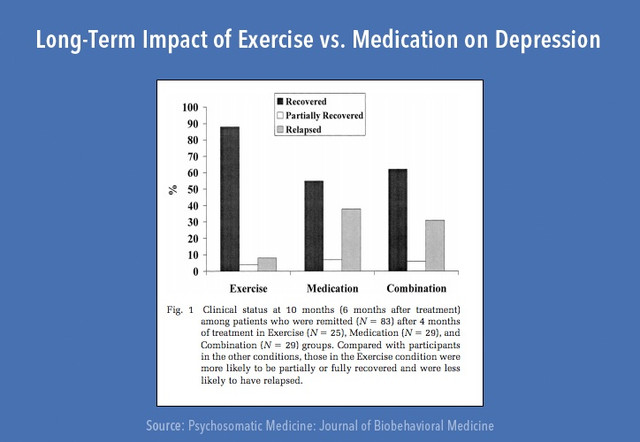 What made the difference?

Dr. Blumenthal and his colleagues described the differences between exercise and medication like this:

“One of the positive psychological benefits of systematic exercise is the development of a sense of personal mastery and positive self-regard, which we believe is likely to play some role in the depression-reducing effects of exercise.”

When it comes to beating depression over the long-term, this is what makes exercise more powerful than medication. It’s not that medication doesn’t work – it does. But exercise does something that medication doesn’t. It proves a new identity to yourself. Each time you finish a workout, you reap the benefits of an increased sense of self-confidence. The cumulative impact of these “small wins” is enormous.

In the words of the researchers, patients who only used medication had the following internal thoughts:

“Instead of incorporating the belief ‘I was dedicated and worked hard with the exercise program; it wasn’t easy, but I beat this depression,’ patients might incorporate the belief that ‘I took an antidepressant and got better.'”

It seems small, but this subtle shift in empowerment and self-confidence is huge. It’s your identity that carries you to success.

But no matter what, it’s your identity that carries you to long-term success. And this is where medication falls short. It treats your symptoms, but doesn’t rebuild your identity.

Cut Your Risk of Depression by Half

As the researchers sorted through the data, they discovered that for every 50 minutes of exercise added each week, the rate of depression fell by half. In other words, if you’re not exercising right now, then adding just one hour of walking per week will cut your risk of depression by 50%.

The same holds true if you’re already an exerciser. Let’s say that right now you exercise for 5 hours each week. Bumping it up to 6 hours will cut your personal risk of depression by half.

I’m sure there is an upper limit to this at some point, but the evidence is clear: exercise often and it’s more likely that you’ll enjoy the rest of your life.

How You Can Apply This To Your Life

But even if you consider yourself to be a happy person, the principle of proving your identity to yourself can apply to virtually any goal you want to achieve.

Pick a daily habit that will strengthen your sense of self-worth and solidify your identity. For example, you could try meditation, exercise, writing, or creating art.

Whatever you choose, pick it now, start small, and begin proving to yourself that you can become the type of person you want to become. Tiny habits, when repeated consistently, can be the difference between success or failure, confidence or doubt, and even happiness or depression. 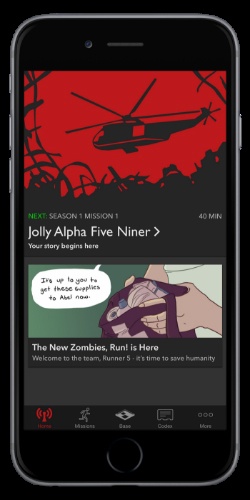